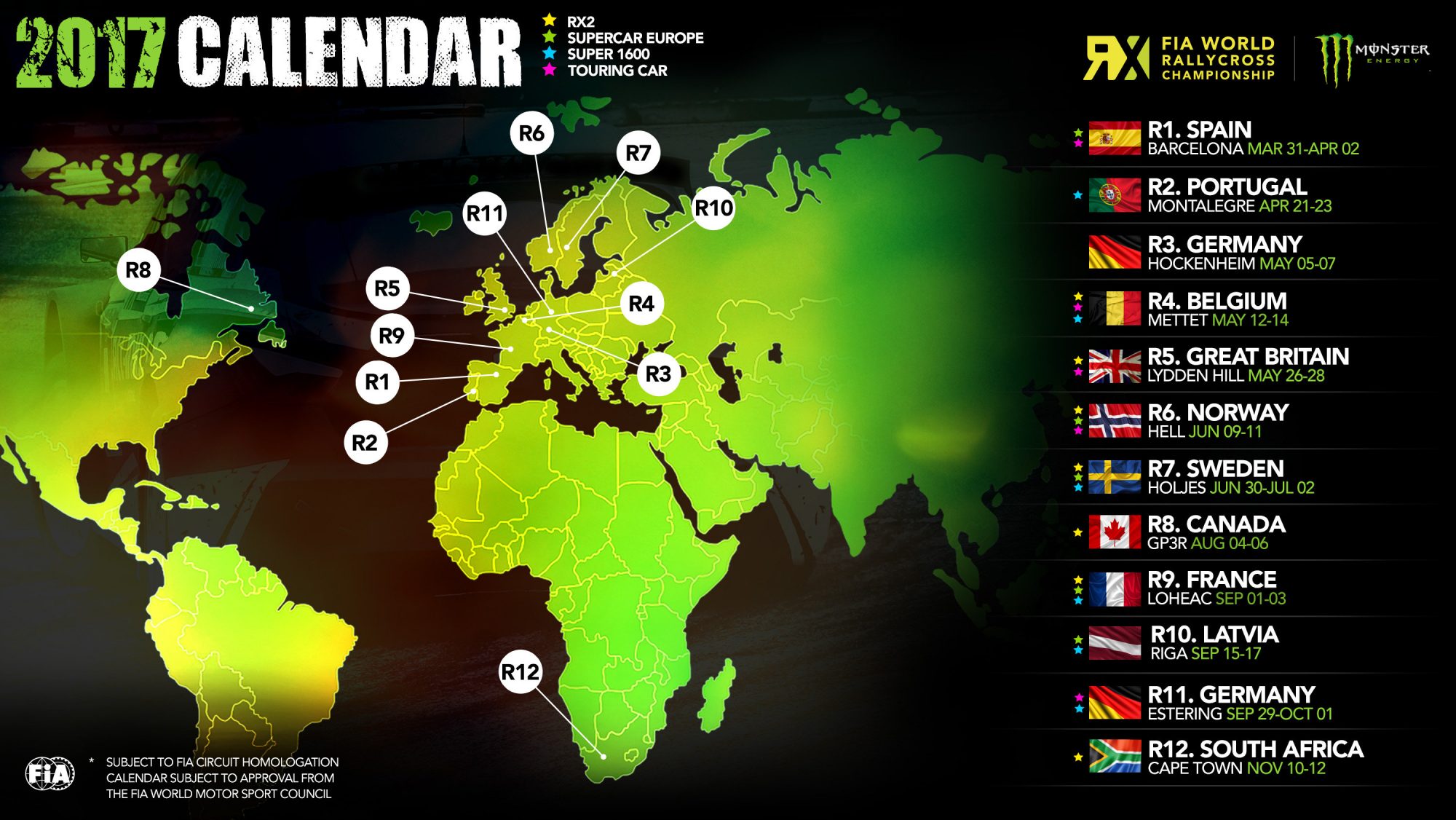 The FIA World Rallycross Championship presented by Monster Energy has announced its draft calendar for 2017. The calendar, which is subject to confirmation by the FIA World Motor Sport Council, consists of 12 rounds including an all-new race at Killarney race circuit in Cape Town, South Africa (11-12 November).

Barcelona will form the opening round for the first time (1-2 April). The teams will then cross into neighbouring Portugal for round two at Montalegre which will take place on 22-23 April. A return to the legendary Hockenheimring follows, which will see World RX join the highly-acclaimed DTM series again for its season-opening weekend (5-7 May).

No date changes have been made to World RX rounds in Great Britain, Belgium, Norway, Sweden, Canada and France. The Latvian RX round will take place two weeks earlier next year, with the event scheduled on 16-17 September. Buxtehude in Germany will once again form the penultimate round of the World Championship, and will also take place two weeks earlier (30 September – 1 October). The 2017 season will finish in Cape Town as rallycross visits the continent of Africa for the first time (11-12 November).

Building on the success of this year, the FIA European Rallycross Championship will again run at five World RX rounds as it did in 2016, but with Loheac joining the series in place of Belgium (Spain, Norway, Sweden France and Latvia). The Super1600 Championship will comprise of six rounds (Portugal, Belgium, Sweden, France, Latvia and Germany) while the competitive TouringCar series will be made up of five events (Spain, Belgium, Great Britain, Norway, and Germany).

RX2 – the newly-branded RX Lites Cup – will follow a revised calendar in 2017 and include seven rounds, two of which will be held outside of Europe for the first time (Belgium, Great Britain, Norway, Sweden, Canada, France and South Africa).

The final round of the 2016 FIA World Rallycross Championship in Rosario, Argentina, is poised to…
END_OF_DOCUMENT_TOKEN_TO_BE_REPLACED
World RX

Latvian Reinis Nitiss will drive for German squad ALL-INKL.COM Muennich Motorsport in the 2016 FIA…
END_OF_DOCUMENT_TOKEN_TO_BE_REPLACED
Go to mobile version
%d bloggers like this: