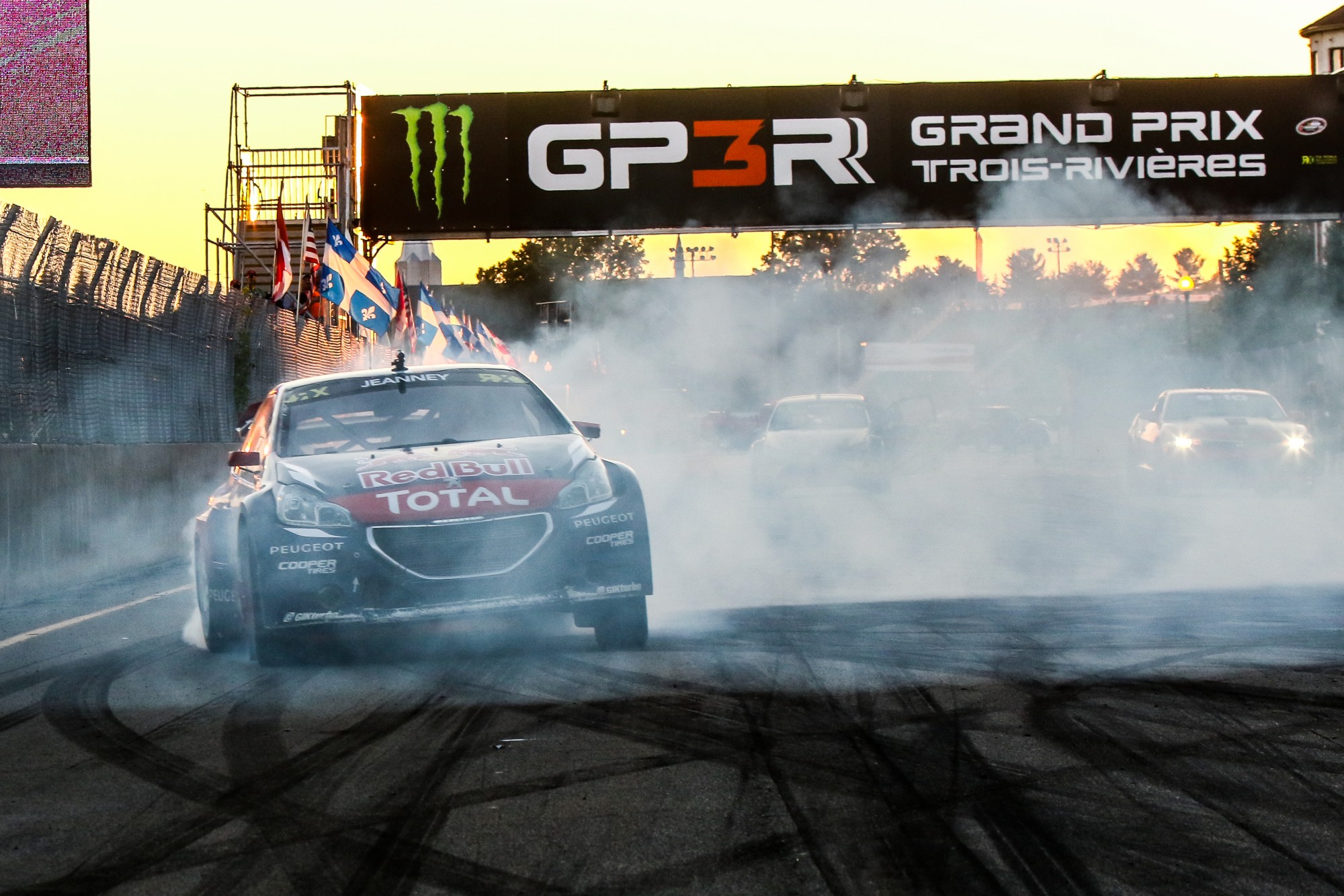 Frenchman Davy Jeanney has won the World RX of Canada, round seven of the FIA World Rallycross Championship presented by Monster Energy, after a lights-to-flag victory at the wheel of a Team Peugeot-Hansen prepared 208 WRX Supercar. Marklund Motorsport team-mates Topi Heikkinen and Tanner Foust finished second and third respectively in a pair of Volkswagen Polo RX Supercars.

In a twist of fate, Championship leader Petter Solberg failed to qualify for the final for the first time since rallycross became an FIA World Championship at the start of 2014. The SDRX driver continues to lead the Driversâ€™ Championship by 46 points after collecting 14 points in the Intermediate Classification stage. Meanwhile Jeanneyâ€™s win for Team Peugeot-Hansen sees the Swedish-based squad move just two points shy of Ford Olsbergs MSE who lead the Teamsâ€™ Championship.

â€œAfter my victory in Buxtehude [Germany], I told myself that I had to do it again â€“ I just didnâ€™t expect it to happen so quickly,â€ grinned Jeanney, who is also awarded the coveted Monster Energy Super Charge Award for his rapid start off the line. â€œEven though I won, it was a really difficult weekend for me: I couldnâ€™t find a good rhythm during the heats and I wasnâ€™t happy with my starts of the line. For the semi-final, I improved my times each lap and my confidence grew. I feel sorry for Timmy, he was top qualifier after the heats and he did a brilliant job. Hopefully he can come back fighting stronger and take a win in Norway.â€

Runner-up Heikkinen spoke of similar difficulties during the heats. â€œItâ€™s been a tough weekend, this track is really technical and doesnâ€™t allow for any mistakes,â€ admitted the Finn. â€œWe had a few mechanical problems on the first day and nothing seemed to be going right for us. Today everything felt much better and by the fourth heat we were fourth quickest. I stayed out of trouble in the semi-final and managed to get on the second row for the final, which gave me a good start. It feels really good to be on the podium again.â€

American Top Gear presenter Tanner Foust made it a double podium for Marklund Motorsport. Foust â€“ who won the Finnish RX round last year â€“ struggled to get to grips with the Polo on day one but dramatically improved his pace ahead of todayâ€™s final. â€œThe full-time drivers are so quick and thereâ€™s a heck of a lot of talented drivers in World RX. It took me a bit of time but by the final everything was feeling good. Iâ€™m just delighted to be on the podium and itâ€™s even better to be here sitting alongside Topi who is my team-mate this weekend.â€

Arguably the most impressive drive of the weekend, however, was that of Tommy Rustad who made his debut with the ALL-INKL.COM Muennich Motorsport Team. Swapping his regular Polo for an Audi S3, Rustad won his semi-final and saw the Muennich Motorsport team qualify for its first ever final.

â€œI felt like Iâ€™d won the lottery after winning my semi race,â€ beamed Rustad, who is currently second in Euro RX which resumes in Norway later this month. â€œThe first time I drove the Audi was yesterday and to reach the final is a bonus. The team have done a brilliant job â€“ they are very professional and itâ€™s been a joy working with them.â€

Rounding off the top five was Ford Olsbergs MSE driver Andreas Bakkerud who is the only driver to have reached every final in World RX this year. The Norwegianâ€™s consistency sees the driver move ahead of Johan Kristoffersson to sit second in the overall standings. Bakkerudâ€™s team-mate Reinis Nitiss was knocked out of the semi-finals after colliding with Timmy Hansen and breaking his carâ€™s suspension.

Home favourites LP Dumoulin and Patrick Carpentier had a weekend of mixed fortunes in their JRM Racing prepared MINI RX Supercars. Dumoulin, the reigning Canadian NASCAR Champion, was hindered with a misfiring engine on day one and was placed 16th at the Intermediate Classification. Carpentier suffered a similar fate when the driver was forced to retire from the first heat after colliding with a concrete wall. JRM Team Principal James Rumsey concluded: â€œThe guys didnâ€™t let yesterdayâ€™s events get them down an they fought like the professional drivers like they are. Itâ€™s always galling to just miss out on the semi-finals but thatâ€™s motorsport.â€

Martin Anayi, World RX Managing Director for IMG, concluded: â€œIn todayâ€™s semi-finals we saw eight different nationalities and five different manufacturers which just goes to show how truly international World RX has become. This weekend has produced some incredibly exciting wheel-to-wheel racing and Iâ€™d like to personally thank the Canadian organisers who have worked extremely hard to make some key improvements to the track. Some of the drivers exceeded 200k/ph on the straight and this track is not only fast but extremely technical too. This combination made for some of the most thrilling racing we have seen all year. Congratulations to Davy Jeanney who came out top for the second time this year. He successfully kept his Peugeot 208 RX Supercar out of trouble and both his and Timmyâ€™s excellent results from the heats have closed the gap at the top of the Teamsâ€™ Championship.â€

Round eight of the Championship, NAF World RX of Norway, is next in the calendar and will take place in two weeks time (22-23 August). The Supercars will be air-freighted on a Boeing 747-400F direct from Montreal to Trondheim next week. GAC â€“ the Championshipâ€™s official logistics partner â€“ delivers cargo across the globe but this will mark the first time that World RX Supercars have been transported by aeroplane.

The final round of the 2016 FIA World Rallycross Championship in Rosario, Argentina, is poised to…
END_OF_DOCUMENT_TOKEN_TO_BE_REPLACED
World RX

The Northamptonshire-based team will tackle all 12 rounds of this yearâ€™s World RX series…
END_OF_DOCUMENT_TOKEN_TO_BE_REPLACED
Go to mobile version
Loading Comments...