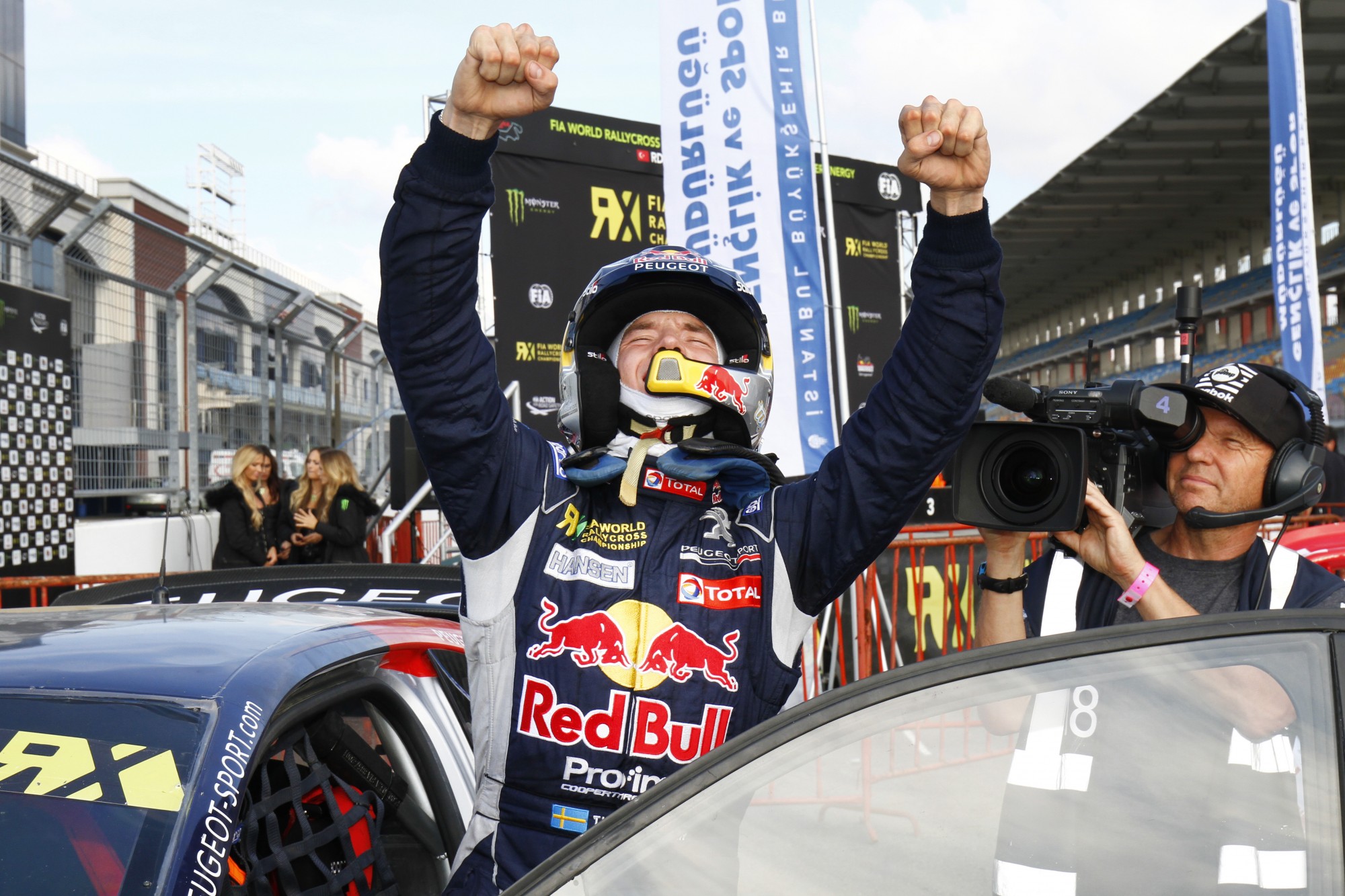 Timmy Hansen has continued his run of good form in the FIA World Rallycross Championship presented by Monster Energy after winning this weekendâ€™s Intercity World RX of Turkey. It is the seventh consecutive event that Team Peugeot-Hansen has finished on the podium. Ford Olsbergs MSE driver Andreas Bakkerud took the runner-up spot and third place was taken by Team Volkswagen Sweden driver Johan Kristoffersson.

This weekendâ€™s result sees Hansen close the gap on Championship leader Petter Solberg – Hansen is now 19 points adrift of Solberg in the overall driversâ€™ standings with two rounds still remaining. â€œWe lost too many points this weekend which isnâ€™t so good for the Championship, now the pressure is really on for Italy,â€ explained Solberg. The Norwegian failed to make todayâ€™s final after he broke his carâ€™s driveshaft in the first semi-final and nursed his Citroen DS3 Supercar to the finish.

â€œMy semi-final was the craziest and most fun race I have had, I have never had to fight so much for a win,â€ grinned Turkey RX winner Hansen, who was also awarded the Monster Energy Super Charge Award for being the first driver to reach turn one in the final. â€œOur start was not so good in the semi-final and there was a lot of chaos with so many close battles going on. I was so happy to come out top. Then the final, wow! I got a great start and then kept pushing until the very end when I did the Joker and just managed to stay ahead of Andreas [Bakkerud]. I actually canâ€™t believe I won today and all I have left to say is that rallycross is the most exciting sport in the world!â€

Bakkuerud â€“ who won last yearâ€™s Turkey RX â€“ was just three hundredths of a second behind event winner Hansen. The Norwegian explained: â€œItâ€™s really great to be back on the podium but itâ€™s hard to be second when youâ€™re so close to the win. The team have worked so hard and itâ€™s nice to be able to give something back to them. Reinis should be here with me. It was a great battle and unfortunately he lost out.â€

Fresh from second place at the recent Barcelona RX, Kristoffersson was full of confidence going to Istanbul and qualified sixth at the Intermediate Classification. The Swede managed to keep his nose clean in the first semi-final to finish third and secure a spot in the final where he started on the third row. Kristoffersson made contact with EKS driver Anton Marklund in the first lap â€“ which led to Marklundâ€™s retirement when smoke filled his car â€“ but Kristoffersson continued. He explained: â€œAs Timmy said, our semi-final was chaos but I managed to make it through to the final and then I had one of the best starts Iâ€™ve had all season. There was so much traffic in turn one so I lost some time and slotted in behind some of the others. After my contact with Anton in turn three, I just tried to focus on the track and do my own thing. Iâ€™m really happy with P3.â€

EKS driver Mattias Ekstrom was top qualifier at the end of todayâ€™s four heats and scored the maximum 16 points available. The two-time DTM Champion made contact with his team-mate Anton Marklund during the final, however, and ended up fourth, with Marklund sixth.

Fifth overall was Frenchman Davy Jeanney who had another solid run in his Peugeot 208 WRX Supercar to help Team Peugeot-Hansen further extend its lead in the overall Teamsâ€™ Championship.

Swedish driver Robin Larsson was on course for a spot in todayâ€™s final but spun his car in the final lap of the second semi-final, costing him a top three spot. It was a similar story for Ford Olsbergs MSE driver Reinis Nitiss who was leading for the majority of his semi-final until a gearbox problem slowed his progress.

Turkey RX also formed the penultimate round of the RX Lites Cup which saw Norwayâ€™s Thomas Bryntesson secure his fourth event win in a row. Swedenâ€™s Kevin Hansen â€“ younger brother of Timmy â€“ was second overall, the driver extending his lead over Kevin Eriksson in the overall standings with just one round remaining.

Arguably the most impressive drive of the weekend, however, was that of Britainâ€™s Tom Onslow-Cole who finished third in the RX Lites Cup on his rallycross debut. Onslow-Cole â€“ who earned the drive in Turkey RX by winning the RX Talent Search at Lydden Hill back in May â€“ showed good pace and race-craft throughout the weekend.

â€œIâ€™ve absolutely loved getting to grips with rallycross this weekend and itâ€™s definitely made me hungry for more,â€ smiled the British GT racer. â€œIâ€™m used to endurance racing and rallycross is a totally different ballgame â€“ even though the races are shorter, itâ€™s equally as exhausting! Iâ€™d love to come back to the rallycross paddock again soon and hopefully this isnâ€™t the last you will see of me.â€

World RX Managing Director for IMG, Paul Bellamy, concluded: â€œItâ€™s great to return to Asia and to another F1 venue which has been well adapted to suit rallycross. Timmy did an excellent job once again, managing to close the gap on Petter in the Driversâ€™ Championship â€“ with only two rounds remaining and a total of 60 points still available, itâ€™s all to play for in Italy and Argentina. Todayâ€™s racing was real nail-biting stuff and made fantastic entertainment not just for the spectators but for our broadcasters around the world too. Once again we had four different manufacturers in the final which just goes to show the great diversity within our Championship. Iâ€™d like to thank the Turkish organisers for putting on a fantastic race weekend and we look forward to returning to Franciacorta where the Championship is set to reach fever pitch.â€

The penultimate round of the FIA World Rallycross Championship will be staged in Franciacorta, Italy, from 16-18 October. It will form the final round of Euro RX, RX Lites and Super1600.

The final round of the 2016 FIA World Rallycross Championship in Rosario, Argentina, is poised to…
END_OF_DOCUMENT_TOKEN_TO_BE_REPLACED
World RX

The Northamptonshire-based team will tackle all 12 rounds of this yearâ€™s World RX series…
END_OF_DOCUMENT_TOKEN_TO_BE_REPLACED
Go to mobile version
%d bloggers like this: