Steady Start from Hyundai at Wales 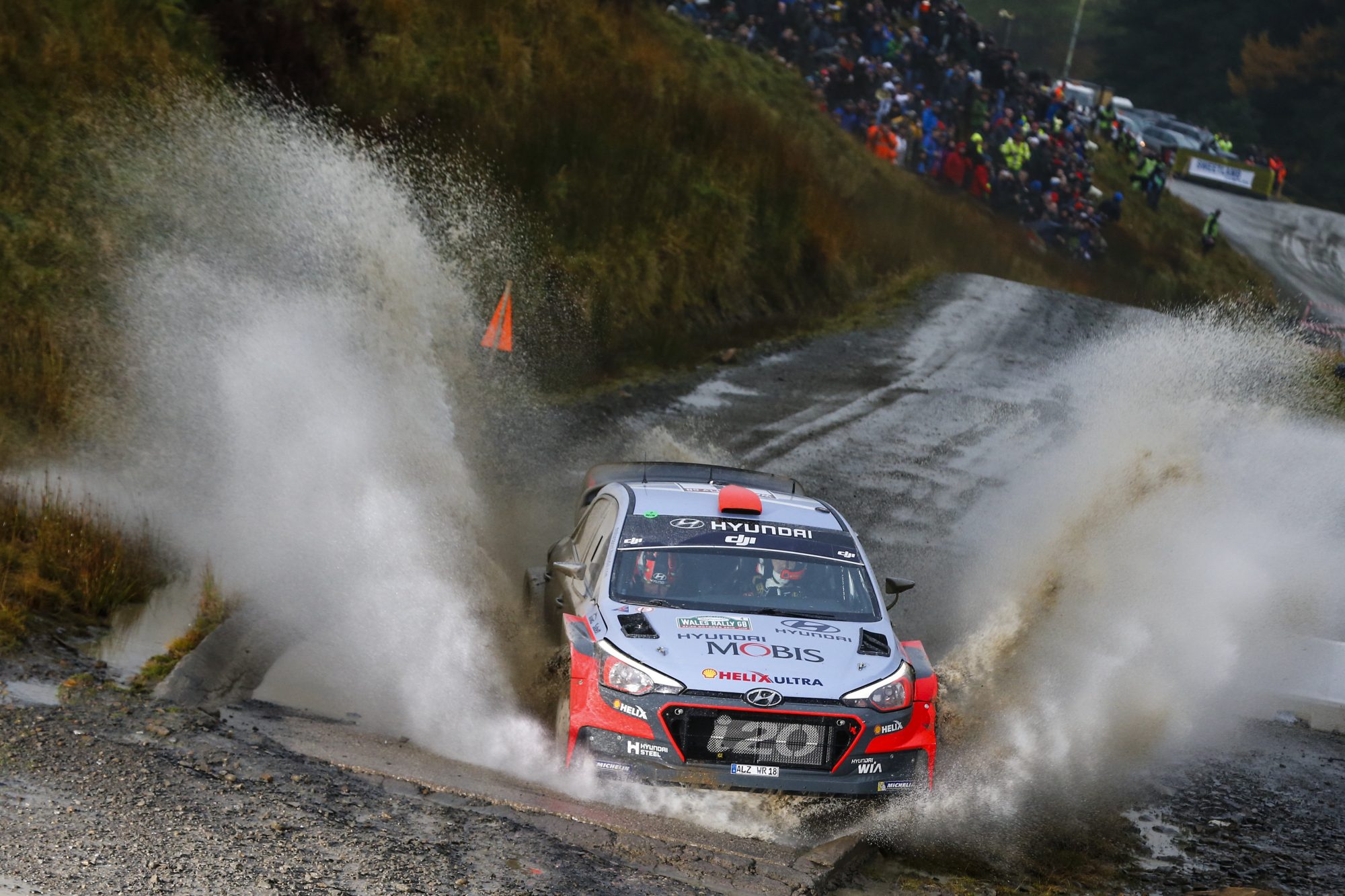 Hyundai Motorsport grabs provisional podium after tough start at Wales Rally GB. Hyundai Motorsport will look to strengthen its challenge for the podium at Wales Rally GB after a tough first day. A steady start by all New Generation i20 WRC crews saw the three cars improve as the day progressed in the foggy and changeable conditions. Thierry Neuville won SS8 to take third, ahead of teammate Hayden Paddon in fourth place, with Dani Sordo in sixth.

Hyundai Motorsport has made a steady start in the tough conditions at Wales Rally GB, round 12 of the 13-event 2016 FIA World Rally Championship, as the teams tackled the traditionally demanding Friday stages.

The patience and determination of the Hyundai Motorsport crews is paying off as both Neuville and Paddon challenge for the final place on the podium. A stage win on the final stage of the day, saw Thierry Neuville and co-driver Nicolas Gilsoul grab third place, just 3.8 seconds ahead of Hayden Paddon in fourth. Dani Sordo lies in sixth.

With over 178 kilometres of stages, Friday has been the longest day of the rally and with no lunchtime service the patience and consistency was key in bringing the cars back to Deeside in a position to challenge over the weekend.

In damp and foggy conditions all crews struggled initially with visibility and variable grip levels on the classic Welsh stages. For much of the morning they were locked in a seven-car battle for the last podium position. After the remote tyre fitting zone over lunch in Newtown, all three cars benefited from the problems of other crews, but consistent times in the afternoon loop saw Neuville and Paddon jump up to third and fourth.

Neuville (#3 New Generation i20 WRC) was surprised that he lost so much time in the swirling fog and slippery conditions on SS1. He also had a spin at the start of SS3 Hafren, but since then has been setting times to challenge for a podium, with four top three stage results including a win in SS8, Dyfant.

Neuville said, “Conditions are tricky and we can’t relax at all. It was very slippery in there. I lost too much time in the fog on the first stage and we had a spin and stalled the car near the start of SS3 which cost us about six seconds. This afternoon has gone much better although the stages were still wet and it was easy to get caught out. It’s now a great battle and I tried to do a good stage to finish the day in the podium position.”

Hayden Paddon (#20 New Generation i20 WRC) alongside compatriot John Kennard started the day with the third fastest time over the 31.82 kilometres of Myherin. Despite being not fully comfortable with the car or the conditions, the Kiwi pair have maintained their position in the top five all day and finished just off the podium places in fourth.

Padden said, ”It’s hard with changing grip levels. Sometimes you brake too early and sometimes too late, but the margins between being too slow and too fast are very small. It’s difficult to judge pace but it’s the same for everyone. I’m happy with the progress we are making, particularly compared to last year and I think we can have a big attack for the podium tomorrow when the conditions are a bit more consistent and should suit us better.”

Sordo (#4 New Generation i20 WRC) and co-driver Marc Martí have been less comfortable with the variable conditions. They had a trouble-free run but found it difficult to get a rhythm with changing grip and visibility. Things improved when the fog cleared later in the morning and the Spanish crew ended the day in sixth place.

Sordo said, “It was really difficult with lots of fog and slippery places – I didn’t feel comfortable throughout the first loop. Once conditions improved towards the end of the morning the times were not so bad and I started enjoying it a bit more. I tried to do my best – but it’s not easy to learn the grip. All in all it has been a tough day for us and we are looking forward to a more positive Saturday.”

The first day of Wales Rally GB was always going to be one of attrition. A 5:30 am start this morning, with long road sections and punishing stages mean the cars and crews needed to keep up the pace until returning to service in the evening. With a long way to go, it was important for crews to be in a position to challenge over the next two days. Half a dozen top-three stage times, including a final stage win, see two Hyundai Motorsport drivers in the battle for the last podium place and all three New Generation i20WRC car in the top six.

Team Principal Michel Nandan commented: “We have seen a typical opening day at Wales Rally GB despite running the event a few weeks earlier than usual. Demanding forests, difficult and changeable conditions and no midday service have meant drivers needed to balance pace with consistency. Good reliability as well as solid times from all our crews means we have two drivers in the middle of a fight for the podium and a good haul of points. Thierry and Hayden finished the day strongly in third and fourth. Dani has not felt comfortable today but if conditions get more consistent tomorrow he can still score good points. Saturday’s stages should suit us better so let’s see how it develops.”

Saturday sees two loops of the classic mid-Wales stages of Pantperthog, Dyfi and Gartheiniog followed by a single run through Aberhirnant and the popular Cholmondeley Castle. Competitors will tackle almost 100 competitive kilometres without any service before the end of the day.

At the completion of the first day of the Rallye Monte-Carlo, Sébastien Ogier held a commanding…
END_OF_DOCUMENT_TOKEN_TO_BE_REPLACED
World Rally Championship

The main attractions of the 13-round calendar include a brand-new three-country concept and a return…
END_OF_DOCUMENT_TOKEN_TO_BE_REPLACED
Go to mobile version
%d bloggers like this: