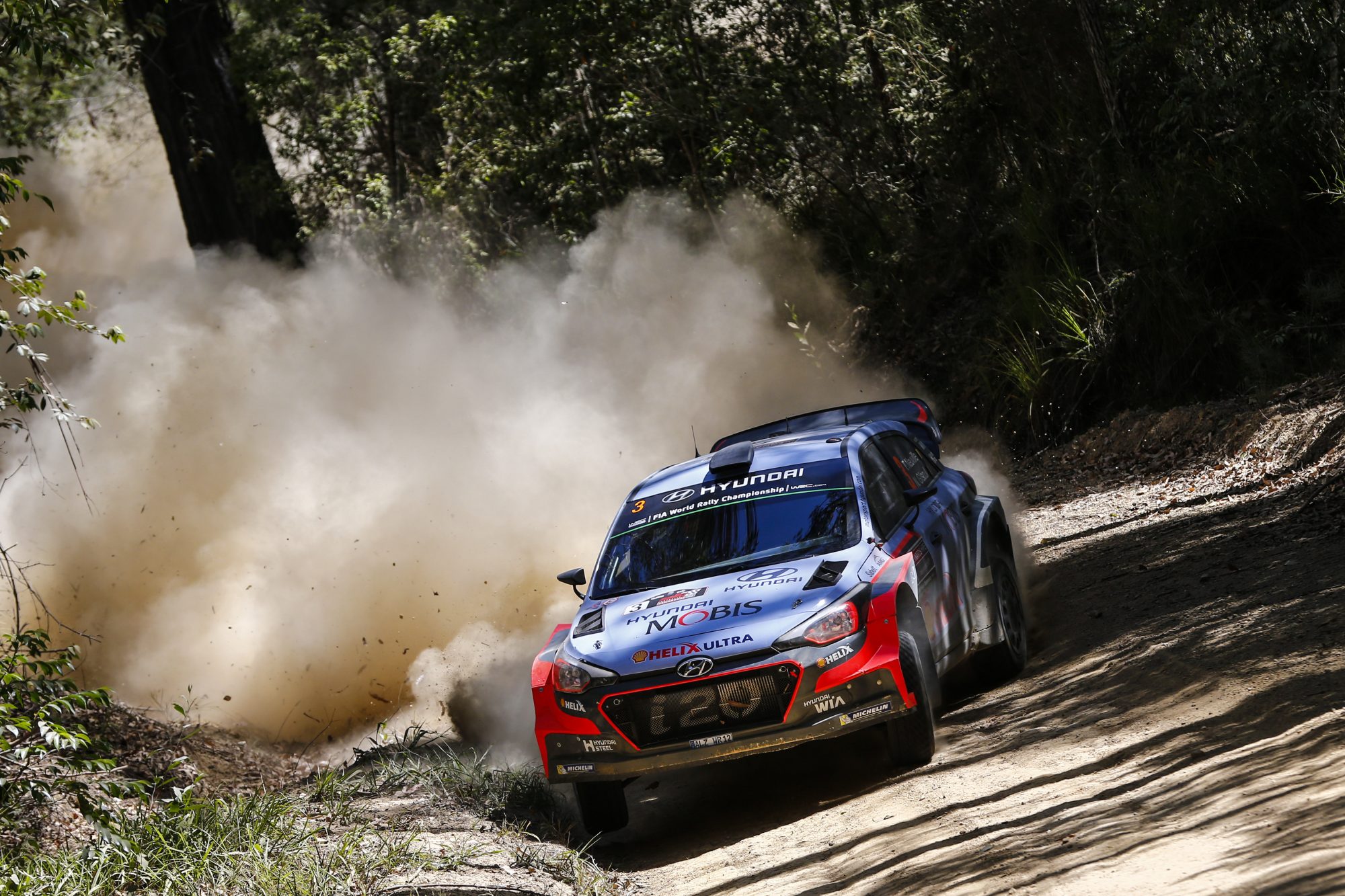 Hyundai Motorsport’s three crews have all completed the opening day of Rally Australia, the final round of the 2016 FIA World Rally Championship (WRC), inside the top-seven as the battle intensifies for second place in the drivers’ classification.

Thierry Neuville held the Championship runner-up position heading into this weekend’s season finale, but facing a challenge from Volkswagen Motorsport’s Andreas Mikkelsen, as well as colleagues Hayden Paddon and Dani Sordo, who all have a mathematical chance of taking the position.

Neuville still holds the advantage after the first 11 stages of Rally Australia, as he finished Friday third on the overall rally standings. Paddon is keeping up the pressure just 1.2s back in fourth. Sordo, meanwhile, was hit with a 20-second penalty for checking into SS4 (Newry) late.

Friday’s itinerary took in an opening run of three familiar stages – Utungun (7.88km), Bakers Creek (16.75km) and Northbank (8.42km) – followed by a revised Newry pass, with all four stages repeated in the afternoon. Crews also had to negotiate three shorter super special stages during the day.

Organisers made the decision to shorten the Newry test from its original 25.30km to just 10.49km after extreme dust in large sections of the stage. That reduced the day’s stage distance total to 91km, but with conditions proving tough on tyres, it still made for a fascinating day of rallying.

Starting second on the road, Neuville (#3 New Generation i20 WRC) and co-driver Nicolas Gilsoul made steady progress during the day. The Belgian crew took a stage win in SS7 (Bakers Creek 2) and followed that up with two second-placed times to move up into third overall, 22.5s off the lead, held by Championship rival Andreas Mikkelsen.

Neuville said: “The morning loop went OK. Our goal was to keep up with Seb (Ogier), who was starting first on the road – just ahead of us. In those conditions, we could run quite close, better than expected to be honest. The afternoon loop went well, and we could set some fast times, which moved us up the classification. Andreas is doing well, and leading the rally, so we know we have to maintain our speed and rhythm in our fight for second in the Championship.”

Paddon (#4 New Generation i20 WRC) and co-driver John Kennard also took a stage win in the opening run of Bakers Creek (SS2), as the Kiwi crew aims for a strong finish to a competitive season. Despite losing time at the end of the morning loop, they are well in contention for a podium in this final rally of the season.

Paddon said: “All in all, I’m pretty satisfied with how this opening day has gone. The first three stages were to my liking, everything was flowing and the car felt good. The only real disappointment was the fourth stage, which didn’t go to plan. We had a lot of moments, and the balance of the car wasn’t ideal. A few half spins lost us some time. We tried something different with the tyres in the first loop with a mix of hard and soft. The afternoon went without any real dramas, and I think we’re well placed for the remainder of the rally. We’re still in the hunt; I’m feeling relaxed and comfortable.”

For Sordo (#20 New Generation i20 WRC) and co-driver Marc Martí, a positive start to the rally was undone with a 20-second time penalty for late check-in to SS4. Dropping from second place as a result, the Spaniards find themselves seventh overall, 11.4-seconds from the top-five.

Sordo said: “It’s been a really disappointing day for us. We started well and were in the fight after the opening three stages. But the time penalty has cost us a 20-second penalty. We misjudged the time we had to make it to SS4. After changing tyres on the road section, we were under some pressure and we missed two junctions on the way to the stage. These things can happen; we are only human. But it’s still immensely frustrating. There’s a long way to go in this rally and we’ll keep pushing.”

Neuville and Paddon’s results today mean that Hyundai Motorsport has taken at least one stage win in each of the 13 rounds this season. Despite already securing second place in the Manufacturers’ Championship, the team is still pushing for performance from its New Generation i20 WRC as it aims to complete its most successful season with a maiden Australian podium.

Team Principal Michel Nandan commented: “A typically tough day on these challenging Australian stages. Even though it’s the final rally of the season, we can’t afford to relax. We’ve had an interesting combination of stages today, and our crews have had to find the right compromise on their tyre choice. Thierry and Hayden are in strong positions, and it was good to add some more stage wins to our season total. Dani’s time penalty was unfortunate but he and Marc will have to try and get themselves back in contention tomorrow. The Drivers’ Championship is intense, and it’s great to see that all three of our crews have taken it down to the wire. It will certainly provide excitement right to the very end!”

The highlight of Saturday’s itinerary is undoubtedly the monster 50.80km Nambucca stage, which kicks off proceedings early in the morning. Followed by the 14.84km Valla test, the schedule will also see a repeat of the Raceway and Destination NSW super specials, making a total SS distance of 135km – almost half of the rally total.

At the completion of the first day of the Rallye Monte-Carlo, Sébastien Ogier held a commanding…
END_OF_DOCUMENT_TOKEN_TO_BE_REPLACED
World Rally Championship

The main attractions of the 13-round calendar include a brand-new three-country concept and a return…
END_OF_DOCUMENT_TOKEN_TO_BE_REPLACED
Go to mobile version
Loading Comments...