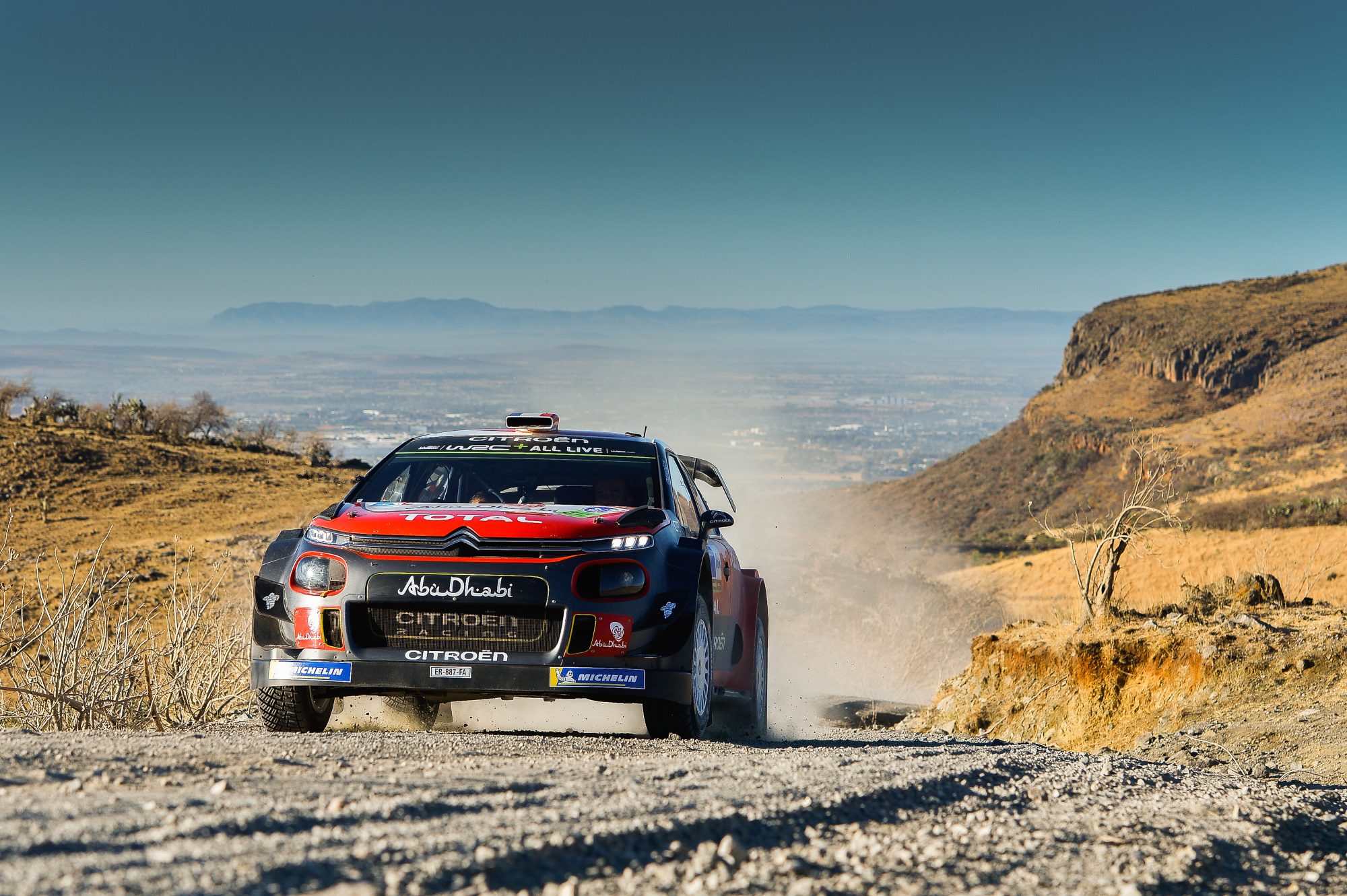 Kris Meeke and Paul Nagle ended the rally third overall, securing a second podium of the year for Citroën Total Abu Dhabi WRT and thus confirming the team’s very strong start to the season. Meanwhile, Sébastien Loeb and Daniel Elena finished fifth overall – after having boldly held the rally lead – as they pulled off a remarkable return to their favourite racing category.

With a series of narrow, winding sections on the day’s opening stage, followed by quicker roads for the two passes on Las Minas, today’s final leg was anything but a Sunday stroll.

Unfortunately, Kris Meeke found this out to his cost on the opening test. His 10.9s overnight advantage on the third-placed driver disappeared when he skidded on the cobbles under braking, losing 47.5s and dropping a position in the standings. He nonetheless managed to hold onto third place until the end of the rally and therefore take his first podium of the year. Citroën Total Abu Dhabi WRT claimed its second podium in the stifling Mexican heat to go with the one secured by Craig Breen in Sweden’s wintry temperatures. The Northern Irishman is now fourth in the drivers’ championship.

Second on the road this morning, a position that prevented him from getting among the frontrunners, Sébastien Loeb made the most of these last few kilometres on gravel with the C3 WRC, whilst safely making it to the end in fifth place. A consequence of the puncture he picked up yesterday when leading the rally, the result does not reflect the full majesty of his performance this weekend on his return to his first love.

At an event that is very demanding on the cars, the C3 WRC scored eight stage wins (two tied), once again proving its reliability and performance level. Thanks to the points claimed this weekend, Citroën Total Abu Dhabi WRT closed to within one point of second place in the manufacturers’ championship.

Kris Meeke : “Obviously, there are positives to take away from this weekend, starting with the fact that I secured my first podium of the year and picked up good points for the championship. But I can’t help but feel disappointed, not least for the team. I had everything you need to win here in Mexico – the pace, the car and road position – but I didn’t do the job. I made too many silly mistakes and you just can’t get away with that at this level. I need to tidy my game up, starting in Corsica where we were very competitive last year.”

Sébastien Loeb : “Coming into the rally, I felt that testing had gone well, but I obviously had no certainty about my level, bearing in mind that everyone is fighting over tenths of a second, and that it doesn’t take much to find yourself left behind a little bit. So it was a nice surprise to be on the pace! I’m just a bit frustrated that I wasn’t able to test myself properly against the others right to the end because of the puncture. In any case, it was a very good weekend and that was the initial aim of this comeback. I hope I can now go on to get a good result in Corsica, even though I’ll still have quite a few things to refamiliarise myself with.”

At the completion of the first day of the Rallye Monte-Carlo, Sébastien Ogier held a commanding…
END_OF_DOCUMENT_TOKEN_TO_BE_REPLACED
World Rally Championship

The main attractions of the 13-round calendar include a brand-new three-country concept and a return…
END_OF_DOCUMENT_TOKEN_TO_BE_REPLACED
Go to mobile version
%d bloggers like this: