Podium finale for Hyundai as Neuville claims 2nd in Championship 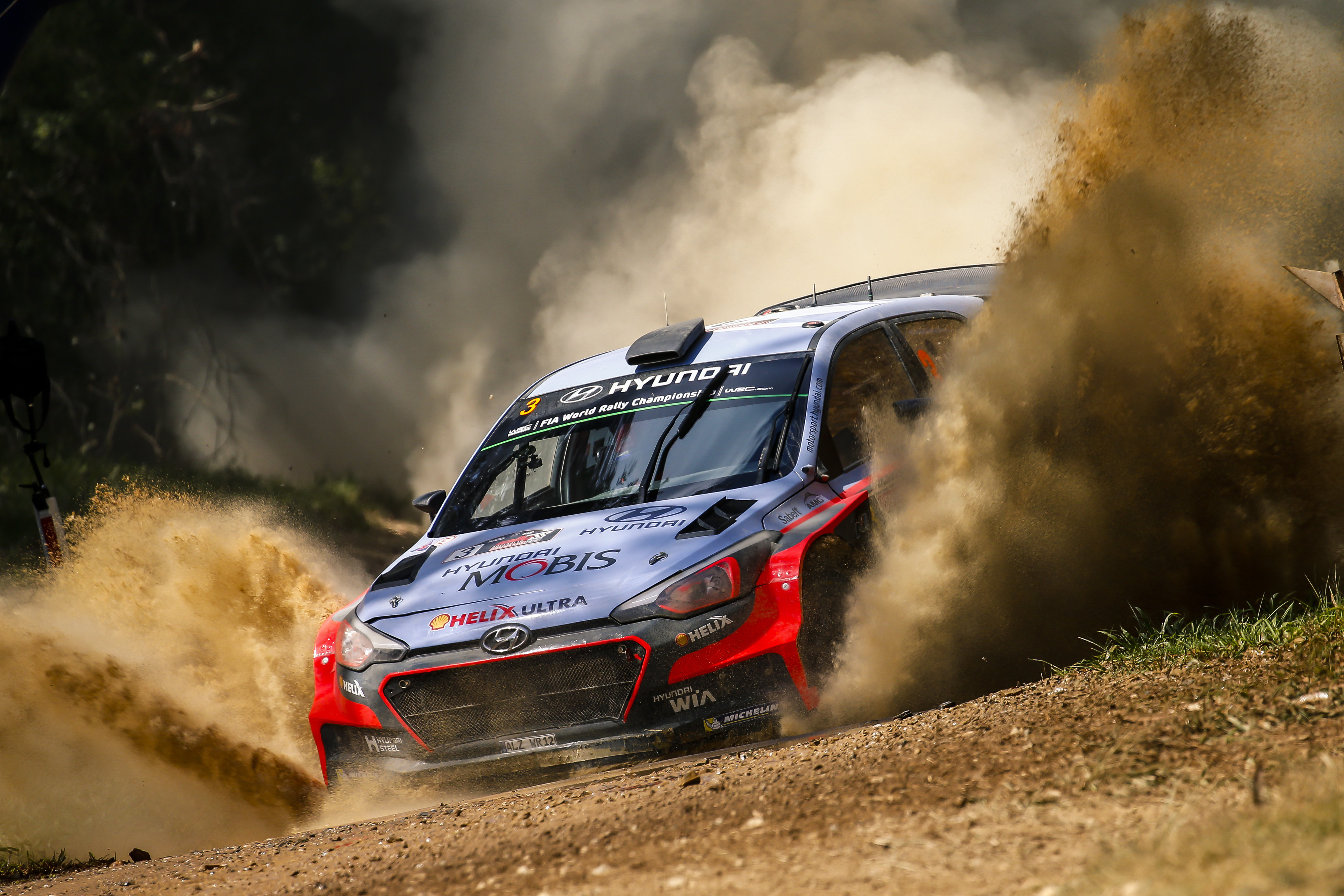 Hyundai Motorsport has claimed a podium finish in Rally Australia, the final round of the 2016 FIA World Rally Championship (WRC) with Thierry Neuville in third place. Hayden Paddon took fourth with Dani Sordo just 1.6s behind in fifth. Neuville and Sordo both picked up extra points for finishing second and third respectively in the Power Stage
The result secures second in the Drivers’ Championship for Neuville after a hard-fought weekend, while the team scored its 12th individual podium result of 2016.

Hyundai Motorsport has completed the final round of the 2016 FIA World Rally Championship (WRC) with a strong podium finish as Thierry Neuville claimed third place on a dramatic final day in Rally Australia.

All three New Generation i20 WRC crews finished inside the top-five with Hayden Paddon taking fourth for the Hyundai Shell World Rally Team just 1.6s ahead of Dani Sordo in the #20 Hyundai Mobis World Rally Team entry. Neuville and Sordo both picked up additional points as they finished second and third in the Power Stage.

The result has enabled Neuville to secure second place in the closely contested Drivers’ Championship. The Belgian’s fifth consecutive podium finish, and seventh in total for the season, leaves him with 160 points, six clear of his nearest challenger – and Rally Australia winner – Andreas Mikkelsen.

Today’s result represents the tenth rally out of 13 in which Hyundai Motorsport has taken a podium with the New Generation i20 WRC this season. Having already confirmed second place in the Manufacturers’ Championship at the last round, the team completes its third and most competitive season in WRC with two victories, twelve individual podium results, 47 stage wins and 24 Power Stage points.

Sunday’s itinerary has covered five stages over a distance of 57.18km. Two passes through 6.20km Settles Reverse and 6.44km Wedding Bells in addition to a solitary run through the 31.90km Bucca stage have offered a stern test to crews on this final day of the 2016 Championship.

For Neuville (#3 New Generation i20 WRC) and Nicolas Gilsoul, who also secured second place in the Co-Drivers’ Championship with today’s result, it was a fitting end to a competitive season. A podium in Monte-Carlo, victory in Sardinia and then consecutive top-three results from Germany right through Australia, it’s been a memorable 2016 for the Belgian crew.

Neuville said: “I am delighted with how this rally has gone. We had some tricky conditions on the first days with our road position, so it hasn’t been easy. We concentrated on keeping our driving clean and we’ve been able to achieve our objectives – a podium finish and second in the Championship. It was particularly nice to end the rally with some Power Stage points. We’ve had the speed in the car all weekend so I’m happy to complete the season in this positive manner. Thanks to the team for a job well done this year. We had a difficult start but since Sardinia we’ve been able to show the speed and consistency necessary to be genuine contenders. I am already looking forward to 2017.”

Paddon (#4 New Generation i20 WRC) and co-driver John Kennard had a frustrating end to their season. With a clear intent to fight for victory, the Kiwis ran wide in the 31.90km Bucca stage this morning, causing damage to their rear tyre. The resultant time loss dropped them down to fifth, but a determined comeback saw them move back up a place by the end of the rally.

Paddon said: “We didn’t want to go down without a fight. We started this morning’s opening stages knowing we’d have to push for the win, but we were determined to give it our best shot. We might not have had the speed to achieve the victory, but a podium would still have been a great way to end the year. For that reason, I was pretty devastated with what happened. We ran slightly wide on a corner, which popped the tyre off the rim, and we had to drive 20km with a puncture. We got over it quickly and knuckled down for the final stages, moving back up to fourth. Not quite the result we wanted, but perhaps representative of our roller-coaster season. There have been ups and downs, but all in all there are plenty of positives and experiences to take forward to next season. Our thanks go to the whole team and to all our fans for the support. We’ll be back next season, stronger than ever!”

Sordo (#20 New Generation i20 WRC) and co-driver Marc Martí ended their 2016 season with a Power Stage point and just 16 seconds off the podium. Considering their 20-second time penalty on Friday, the Spanish crew are left wondering what might have been this weekend.

Sordo said: “We wanted to give it a big push today to see how strongly we could finish the rally – and the 2016 season. We were in a very close battle with Hayden for fourth, and we gave it a good attempt. Of course, whether you finish fourth or fifth in these circumstances doesn’t really matter but it was nice to score a Power Stage point for our efforts. Without the time penalty on Friday, we could have been fighting for the podium but these things happen. Thank you to the team for their work this season. We might have missed a victory along the way but we have taken a few podiums. It’s been a positive season and definitely gives us something to build on.”

Rally Australia represented the final WRC outing for the New Generation i20 WRC car with new technical regulations and a brand new car being introduced for the 2017 Championship. With two wins and second place in the Manufacturers’ Championship, 2016 has been Hyundai Motorsport’s most competitive season in the WRC, topped off with the team’s maiden Australian top-three result.

Team Principal Michel Nandan commented: “We knew we’d be in for a thrilling final day. There were a few final twists in the tale of the 2016 season, but overall we can be satisfied with our debut Australian podium. Well done to Thierry and Nicolas on their performance and claiming second place in the Drivers and Co-drivers’ Championships. They have had a fantastic season, particularly since their win in Sardinia. It was a pity for Hayden that his incident this morning prevented a push for victory. Dani, too, was also unfortunate not to be able to fight for a better result. As a team, we have had a strong year. The New Generation i20 WRC has done us proud but it’s the result of hard work by the entire team. We have shown a lot of progress and maturity this year, and I am personally grateful to every individual member of Hyundai Motorsport for their valuable contributions. I would also like to extend my heartfelt thanks to Volkswagen Motorsport for being such fierce competitors. They have set the benchmark very high. We will miss competing against them, but will continue to be inspired by their achievements.”

At the completion of the first day of the Rallye Monte-Carlo, Sébastien Ogier held a commanding…
END_OF_DOCUMENT_TOKEN_TO_BE_REPLACED
World Rally Championship

The main attractions of the 13-round calendar include a brand-new three-country concept and a return…
END_OF_DOCUMENT_TOKEN_TO_BE_REPLACED
Go to mobile version
%d bloggers like this: