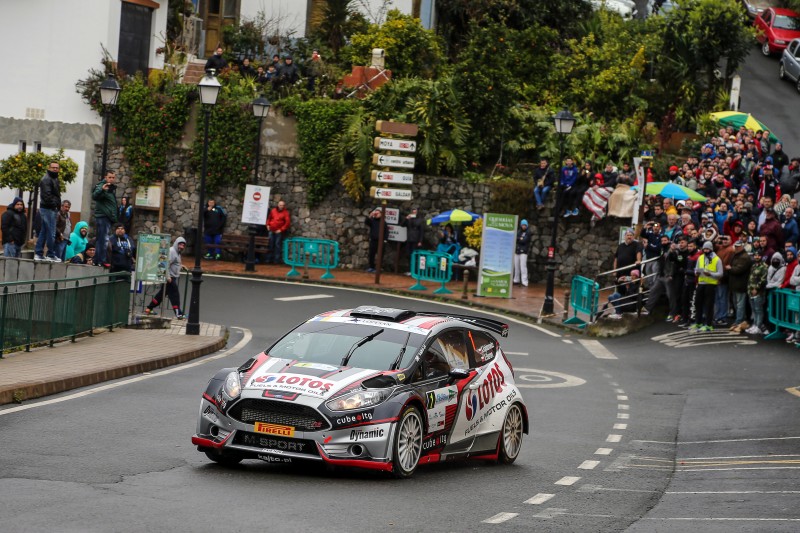 Making his ERC debut, Ostberg won the first stage of the 2016 ERC season by a single tenth of a second before opening up an advantage of 9.3 seconds over the remaining two stages on the opening loop. Third after the first test, Kajetanowicz then took four consecutive wins to cut Ostberg’s lead to 6.9s with one stage remaining before the overnight halt.

Towards the end of that final stage, Ostberg was unable to get his Ford Fiesta R5 stopped for a tight corner after suffering a problem with the brakes. After contact with a wall damaged his RMC Motorsport-prepared car, the Norwegian and co-driver Ola FlÃ¸ene had to complete the stage on foot. They will not restart on Saturday.

“I had a bit of a warning before, when the brake didn’t seem to be working very well,” said Ostberg. “But then it seemed to be better and I thought maybe it was just some dirt or something. Unfortunately, though it happened again and when you’re pushing hard there’s not much left in reserve, so we crashed. It’s a real pity as we were enjoying the rally; there’s a fantastic atmosphere. “The damage is quite big, all the suspension is gone and the side of the car is pushed in: the differential is damaged too.”

Kajetanowicz picked up a lead of 22.7 seconds over fellow Fiesta driver Alexey Lukyanuk, who began the day by setting the pace for a large part of the wet opening stage before losing time on his soft tyres in a dryer section at the end, finishing up 0.1s slower than Ostberg. Rueing his tyre compound choice, the Russian lost further time as the first loop went on but he did end the day by bringing Kajetanowicz’s run of stage wins to an end.

“It is great as we are in the lead after the whole day of competition,” said Kajetanowicz. “The battle with Mads was awesome and it is a pity that he went off because we were fighting for fractions of seconds. Here it is very difficult to achieve such similar times on these long stages, under changeable conditions and different tyres. It is great that we were winning the stages, he was pushing a lot and it was clear that for sure he was not easing off, he was attacking. I am very happy after this day, a bit tired because the g-forces took their toll on me. We did our job as well as we could. For us the rally is still on, we will fight and try to do our best tomorrow ““ but first of all we have to get a good sleep.”

Robert Consani finished the day in third in a Peugeot 208 T16 for the first time. He is 10.5 seconds ahead of the local favourite Luis MonzÃ³n, who has struggled with mechanical issues in his CitroÃ«n DS3 R5 but is hopeful of getting the car fixed overnight and scoring another podium finish at his home event.

Dutch driver Hermen Kobus lost time when he missed a turn on SS4 and had to reverse but fought back to sixth place in his Å KODA Fabia R5 and is only 2.5s away from the top-five place he’s targeted for this event, currently held by Spanish runner Jonathan Perez. Another Spaniard, IvÃ¡n Ares, had made it a top-four lockout for the Ford Fiesta R5 behind the trio of Ostberg, Kajetanowicz and Lukyanuk but he lost considerable time with mechanical woes through the final two stages of the day and has fallen to 11th.

Others in strife included Italian Federico Della Casa, who was seventh when his DS3 R5 stopped on SS5, as did the similar machine belonging to Lebanese debutant Gilbert Bannout. ERC2 champion DÃ¡vid Botka hasn’t had the step up to a DS3 R5 that he was hoping for, suffering from a broken clutch through the morning before retiring in the afternoon.

ChuchaÅ‚a in control of ERC2 pack
Wojciech ChuchaÅ‚a has led the ERC2 category from the start, setting the best time on all six stages. The new Subaru Poland Rally Team signing was a fine seventh overall on the first test in his Impreza STi and after initially losing out to some R5 machinery he’s now back up to eighth. Former Italian junior champion Giacomo Scattolon has been ChuchaÅ‚a’s closest class rival, now 1m48.9s back in his Mitsubishi Lancer. Peter Ranga holds third ahead of fellow Mitsubishi drivers Juan Carlos Alonso and Tibor Ã‰rdi.

Habaj ahead in ERC3, Bostanci climbs to second
Just as ChuchaÅ‚a has swept the board in ERC2, his compatriot (and successor as Polish champion last year) Åukasz Habaj has been unbeatable in ERC3. The Peugeot 208 R2 driver’s advantage was narrow over fellow Poles Åukasz PieniÄ…Å¼ek and Tomasz Gryc halfway through the day, but PieniÄ…Å¼ek’s Opel Adam R2 ultimately succumbed to front-right damage he sustained on SS4 and Gryc slipped back to fourth in class on the day’s final stage in the sister Rallytechnology car to Habaj. After a scrappy opener, Turkey’s Murat Bostanci has been on the rise and is now second, 1m04.01s behind Habaj, while returning double ERC 2WD champion ZoltÃ¡n Bessenyey has moved up to third in his Renault Clio RS R3T. The Hungarian is 5.6s behind Bostanci and 2.4s ahead of Gryc. Four-time Slovenian champion Aleks Humar is fifth. Aleks Zawada’s rally ended on the first stage when he suffered a broken driveshaft.

WHAT’S NEXT?
Leg two on Saturday (12 March) begins at 09h05 local time and is made up of six stages and 104.52 competitive kilometres. Ingenio (22.84km), Galdar (13.97km) and Valleseco (15.45km) will stage the day’s action, with each test run in both the morning and then again in the afternoon, with a service halt in Las Palmas in between.