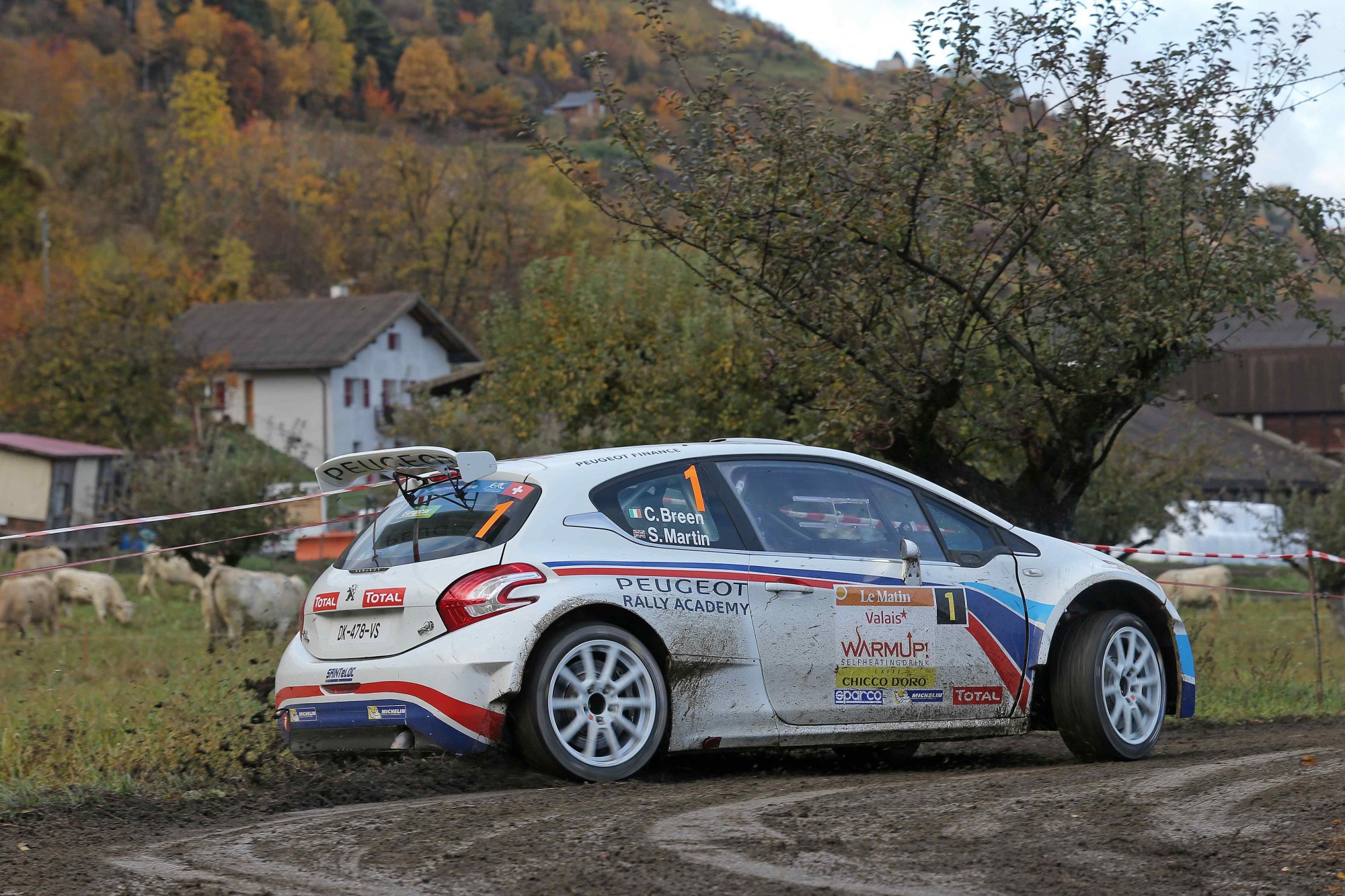 Craig Breen has taken an early lead on the Rallye International du Valais, after recording his first clean run through the opening leg of the Swiss round of the FIA European Rally Championship. The Peugeot Rally Academy driver set fastest time on all three opening stages, to lead overnight by 15.4 seconds.

The Irishman lost all hopes of victory last year when he picked up a puncture on the AnzÃ¨re test, and despite admitting to being â€œparanoidâ€ in his attempts to avoid another flat on his run through the same stage this time, three faultless stages today have given Breen and co-driver Scott Martin the advantage as they arrived back in Sion for the first overnight halt.

Despite lacking some match-practice and a mid-loop intercom problem, eight-time Valais winner Olivier Burri is second in his CitroÃ«n DS3 RRC, and poised to attack Breenâ€™s lead on tomorrowâ€™s seven stages.

The Swiss mountain Tarmac roads are nothing that Alexey Lukyanuk has seen before, and a cautious experience-gaining pace has paid dividends, as the Russian is third overnight in his Pirelli-equipped H-Racing prepared Russian Performance Motorsport Ford Fiesta R5.

The slippery hairpin filled Alpine roads are hardly ideal territory for a powerful rear-wheel drive car, not when pitched against nimble four-wheel drive machinery, but magic things happen when FranÃ§ois Delecour gets behind the wheel of a Porsche 997. The new FIA R-GT champion is fourth overnight, admitting to driving â€œmaximum everywhereâ€.

Emil Bergkvist has made a very impressive start on his R5 debut. The 21-year old Swede is driving a Michelin-shod 208 T16 run by SaintÃ©loc Racing as a prize-drive for winning the ERC Junior title, and is a fantastic seventh overnight â€“ one place ahead of Bruno MagalhÃ£es in an identical car.

Others havenâ€™t enjoyed such a good trouble-free start. Raul Jeets had an engine problem with his MM-Motorsport Ford Fiesta R5, which forced him to turn the anti-lag system off and run in road mode for virtually all three stages. Jonathan Hirschi damaged the front of his Peugeot 208 T16 after braking too late for a tight downhill corner. Nikolay Gryazin successfully completed his first ERC stage in his Å KODA Fabia R5, but the 18-year old Russian lost a minute with a front right puncture on SS2. AntonÃ­n TlusÅ¥Ã¡k also picked up a front right puncture on his Fabia S2000 on SS3.

Having been second fastest over the Qualifying Stage, Bryan Bouffier ran wide on a fast right hand corner on the opening stage â€“ hitting a wall and retiring his Peugeot 208 T16 with a broken left rear wheel and smashed brake disc.

Alexey Lukyanuk leads the Azores Airlines Rallye after Kajetan Kajetanowicz crashed out at the start…
END_OF_DOCUMENT_TOKEN_TO_BE_REPLACED
Go to mobile version
%d bloggers like this: