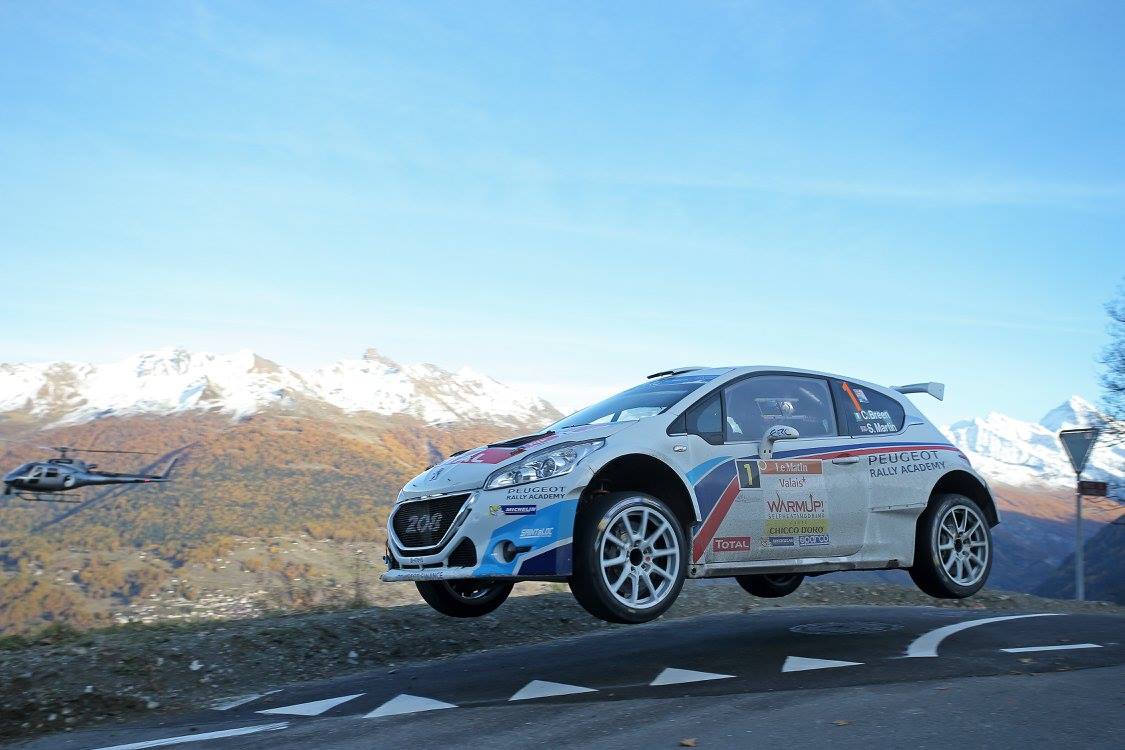 Craig Breen has taken another big step towards winning the 2015 Rallye International du Valais, after a dominant performance on leg two of the Swiss round of the FIA European Rally Championship.

Co-driven by Scott Martin, the Peugeot Rally Academy 208 T16 driver set the fastest time on five of todayâ€™s seven stunning mountain stages, to increase his overnight lead from 15.4 seconds to 55.9 seconds. On cold north-facing roads, filled with patches of damp fallen autumn leaves, recording a perfect trouble-free day was no mean feat, although a confident Breen is making his awe-inspiring performance look easy.

â€œItâ€™s nice to do a rally with no pressure and just go out and enjoy yourself,â€ said Breen. â€œWeâ€™ve had a lot of stage wins and no problems with the car, so Iâ€™m happy with that. Weâ€™re just driving in the middle of the road and not taking any risks. We have a nice cushion, so the plan is to keep our head down tomorrow and take the win.â€

Olivier Burri remains second in his CitroÃ«n DS3 RRC, the eight-time Valais winner slowed slightly with more intercom problems and some tyre selection issues today. Rather than challenging Breen for victory, Burri is coming under extreme pressure from Valais rookie Alexey Lukyanuk. Despite his own intercom problems, and taking too harder compound Pirelli tyres in the morning, the Russian Performance Motorsport Ford Fiesta R5 driver is third tonight, just 13.8s behind Burri. On his first Rallye du Valais, Lukyanuk even set fastest time on the final stage today and was truly spectacular over the famous Valais jump.

The slippery and twisty mountain roads are ideal conditions for nimble four-wheel drive cars, but defying logic is the star of the alpine roads, FIA R-GT champion FranÃ§ois Delecour. His Tuthill Porsche 997 has been sideways for much of the day, and heâ€™s had to take a slightly more gentle approach this afternoon, after clipping a house this morning and damaging the rear suspension. Delecour remains an incredible fourth overall, and whilst the gravel sections tomorrow are likely to be a huge disadvantage, the laws of physics havenâ€™t influenced his stunning stage times so far!

Florian Gonon set fastest time on SS7, the short Caserne stage, located next to service park in Sion. Last yearâ€™s ERC Production Car Cup winner is fifth tonight in his Lugano Racing Team Peugeot 207 S2000. Like his follow countryman Burri, Gonon is coming under pressure from a Valais newcomer, in this case Emil Bergkvist. The ERC Junior champion is enjoying a fantastic debut in a four-wheel drive car, learning on the first passes and increasing his pace in the SaintÃ©loc Racing Peugeot 208 T16 on the repeat runs through the stages. The talented ADAC Opel Rallye Junior Team driver is sixth tonight, just 5.7s behind Gonon.

Another youngster going very well is Nikolay Gryazin. On his first event in a Å KODA Baltic Motorsport Fabia R5, the 18-year old Russian driver is ninth, after tyre problems (including a puncture) yesterday.

Bruno MagalhÃ£es, Jonathan Hirschi (both 208 T16) and Miroslav JakeÅ¡ (CitroÃ«n DS3 R5) all hit the same bridge on a particularly slippery section of SS6. MagalhÃ£es completed the stage with suspension damage, and having lost over five minutes drove to rebuild his confidence and knowledge of the Swiss stages in the afternoon. Hirschi continued after changing a broken wheel and losing two minutes. He flew high over the famous jump on SS9, and completed the day in 10th but with fuel pressure problems, and hoping the heavy landing hasnâ€™t damaged anything. Unfortunately for JakeÅ¡, he retired at the bridge.

Raul Jeets has struggled with engine problems in his MM-Motorsport Ford Fiesta R5 all event. Yesterday he was forced to turn the anti-lag system off and run in road mode, and today the car cut out near the start of Leg 2â€™s opening stage and refused to restart. With 44% of the stage distance planned tomorrow, the Estonian is hopeful that the electrical problem can be fixed and that heâ€™ll return under Rally 2 rules.

Alexey Lukyanuk leads the Azores Airlines Rallye after Kajetan Kajetanowicz crashed out at the start…
END_OF_DOCUMENT_TOKEN_TO_BE_REPLACED
Go to mobile version
%d bloggers like this: